Skip to main content
The signature pastry you will find at Olde World Pastries Plus is our Danish Kringle. We use five secret ingredients in the dough that comes from recipes that are hundreds of years old and brought to America by Danish immigrants. Making our kringles requires a lot of patience because the labor of love takes a set amount of time for the mix and more time to sheet the dough before it’s filled and baked.

Each kringle comes out the same size and weight, but in more than 40 different and tasty flavors, including our most popular, caramel nut. Other popular Danish Kringle flavors include raspberry, raspberry cream cheese, cherry, and Brandy Old Fashion.

Here is a list of more of our Kringle Flavors:

We use local ingredients as much as possible… 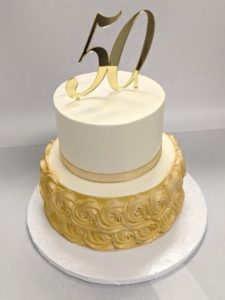 As many of our customers know, we are a custom bake shop, which means we custom make all of our cakes in every shape, size, or flavor. Whether you’re celebrating a 1st birthday or 100th, wedding or anniversary, baby shower or adoption, or any celebration under the sun, we have you covered. And of course, we make traditional cupcakes, Boozed-up cupcakes, Danish layer cakes, mini-cheesecakes, and other traditional cakes.

GLUTEN FREE: We do offer gluten-free cakes in vanilla white chocolate, carrot, and death by chocolate. 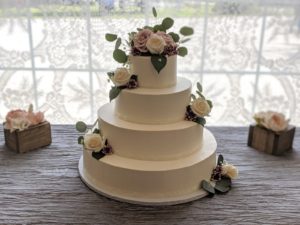 Please inquire about regular wedding cakes, and check back for our cake list which is coming soon.

Olde World Pastries Plus boozed up cupcakes come in a variety of interesting flavors, ranging from Mango Rum (guess the ingredients), The Blarney (chocolate chip with Irish cream and Bailey’s), Rum and Coke (enough said), Strawberry Margarita (lime and strawberry with a tequila glaze), Frangelico Chocolate Hazelnut (espresso, Frangelico and hazelnut with cream cheese), The Cosmopolitan (raspberry with a cream cheese, lime, and vodka frosting), Drunken Butter Rum (vanilla, pecan, and lots of rum), The White Russian (vanilla with a vanilla and vodka glaze with a whipped cream and Kahlua frosting), The Irish Car Bomb (Guinness and chocolate with a whiskey ganache and Bailey’s buttercream),

We also have a range of traditional cupcakes from our #1 seller, Sour cream almond cake with Italian buttercream to our chocolate cupcake with chocolate buttercream that has just a hint of espresso. Many of our other flavors include vanilla, marble, yellow cake, red velvet, lemon, lemon poppyseed, banana, carrot, cherry, strawberry, raspberry, funfetti, Boston cream, smore’s and more.

GLUTEN FREE: We do offer gluten-free cupcakes in vanilla white chocolate, carrot, and death by chocolate. 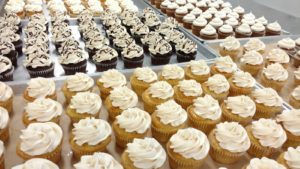 We import our Yooper-style pasties from Michigan’s Upper Peninsula. Dobber’s Pasties in Escanaba is our source for rutabaga pasties that are offered in beef, chicken, and vegetable with cheese varieties. We have tried quite a few pasties in our day, and have found that Dobber’s Pasties are the most authentic and tastiest around.
If you are looking for stollen, kolache, or other European bakery delicacies, including our cheesecake varieties, contact us. We also produce seasonal pastries, such as caramel apple, mixed berry, and pumpkin kringle in season.

We also do custom cookie trays which give you the option of buying the dough in bulk, already cut-out, baked but unfrosted, or completely finished.

We can help you raise significant funds for your organization. Stop by or give us a call for more details.